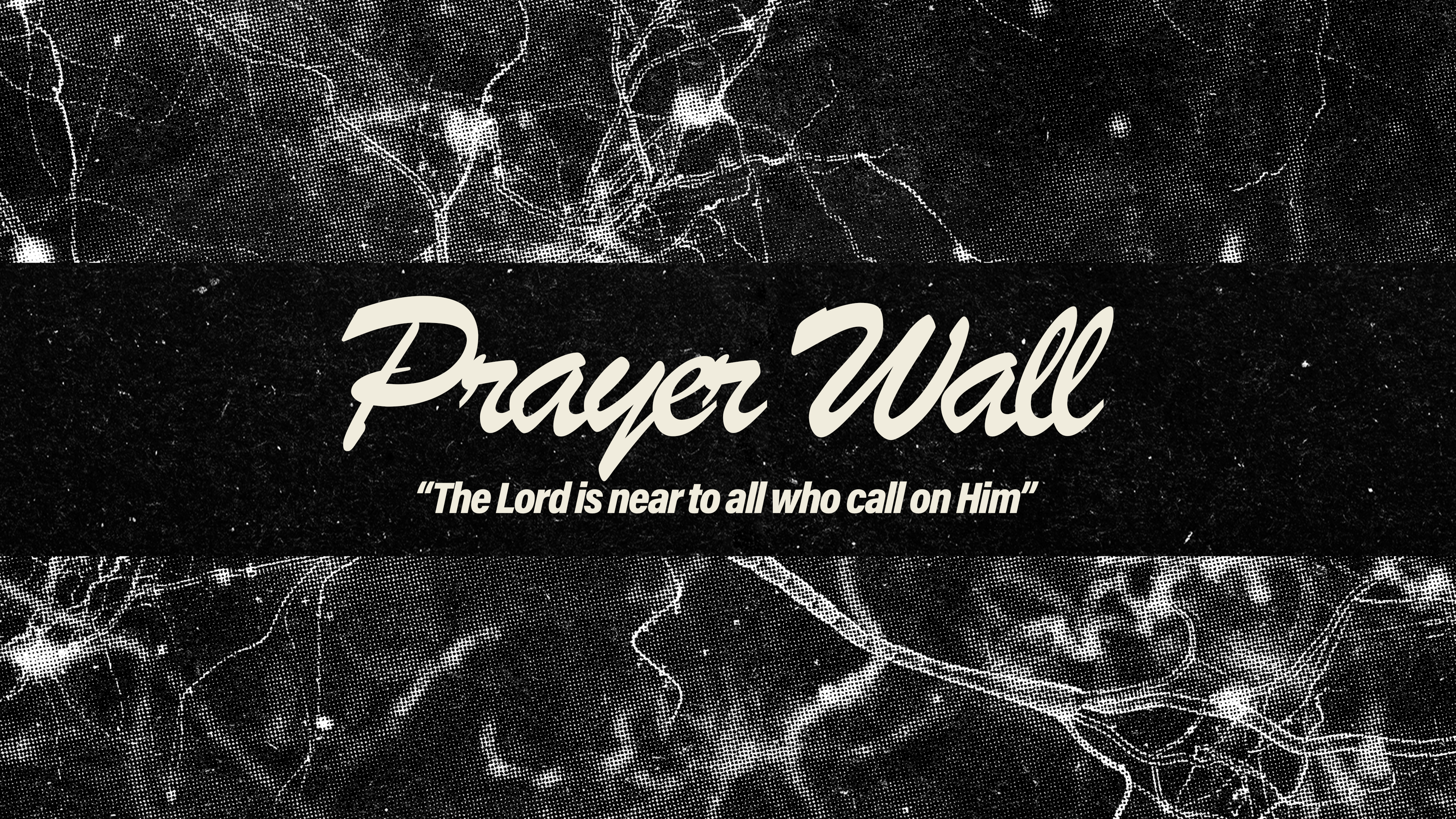 Welcome to the Potential Church prayer wall. Share your prayer request below (anonymously, if you prefer) and pray for others at the same time. All prayer posts are moderated, so please allow 24-hours for your request to appear.

I need peace . I can’t control my anxiety and I need my health to be better to keep alive and strong . I have a 7 year old and i feel that I can’t handle a difficult situation in going through right now . I need peace . 🙁

Hello... I would like to ask for prayers for my daughter Anya Young she is 13 years old and is a very bright beautiful young lady. This past weekend we had a disagreement as you all know at that age teeenagers think they know everything but in this case the actions that took place were not normal. Anya grabbed scissors cut her hair and than slashed her lips I asked why did she do that and her answer was "MOM, BECAUSE EVERYTHING I SAY HURTS PEOPLE" I am currently seeking therapy but I also need prayers. I have all sorts of emotions and I'm afraid she might try to kill or hurt herself. We do attend Potential church and my fiance and I just got baptized on Easter Sunday on the beach, I feel that the enemy is trying to attack my family in some sort of way or another. I would highly appreciate your prayers for us especially our amazing daughter Anya.

Please pray for my boyfriend/best friend who suffers from mental illness. Pray that God continues to show him the direction out of the dark into the light, helps transform him into the man that God has destined him to be. That he continues to become mentally, spiritually, and physically stronger every day. For God to save him and show him the beautiful life that he has for him and his purpose. Also, for his dad to be saved by God and to help get him through this tough season in his life. For him to start attending Potential church this Easter weekend.

Please pray for my upcoming appointments for my new cervical cancer diagnosis. I have a PET scan on 4/8 and extensive physical exam with oncologist on 4/12. I pray that there may not be any cancer and if there is that it is very small and the cancer did not spread. Overall, I pray the cancer is not invasive if it is even present. I pray for peace and take worry away from me. I pray for a correct diagnosis and fast healing and keeping the option to have more children. I just had a baby 3 months ago and I pray for his well-being and that he is not affected by all of this. I pray for all my family and friends with how this news effects their lives, especially my husband. Give us both the strength to overcome this life obstacle.

My son needs your prayers. He's 23, brilliant, talented, plays his sax with heart & soul, received a partial music scholarship at an out-of-state University 2.5yrs. ago. He left for college full of hopes & dreams, excited to study music, study psychology, and fulfil his dream of using music as therapy to heal others' pain. That dream within a year was crushed by drug use. He never tried drugs in high school, never gave me a hard time about anything, was a marching band captain for 3 yrs. and graduated high school with honors. What started out as just harmless marijuana (according to him) at a party in college, progressed to other drugs. First year in college he took 19 credits and held a 3.9 GPA. His second year, his GPA plummeted to 1.4.

I brought him home & tried everything I could as a single mother to get him to commit to a drug-rehab program. His father offered no support because he feels that our son can just give this up on his own will. My son actually carries many hurts due to his father's lack of support about a lot of things in his life, including his desire to study music. My son attended a 6 week IOP (Intensive Outpatient Program) which I paid for by working two jobs. He did so well that he was allowed to stay for an additional 6weeks at no additional cost. He even began mentoring new members. However, around the 9th week, things started going downhill again. He went to a coworkers party, and that one night of marijuana smoking unraveled his sobriety. My son told me it was like a switch that was turned on and he could not stop. That was a little over a year ago. End of November of this past year (2020), he himself agreed to go into an in-house mental illness & drug rehab facility. I could not afford to pay the enormous fee, but God heard my prayers and the facility agreed to accept only my son's insurance as payment. My son & I cried together for this blessing. He promised he will do everything he needs to do to get better. He received intensive group therapy every day, 2x day. Private therapy once a week. After 30 days the insurance was not willing to approve further treatment because his main drug of choice was marijuana, and the insurance company says that it is not an addictive substance and 30 days of treatment was enough time. The rehab facility felt that it was too soon for him to leave, and felt that a 90 day program would be better for him. I am not able to pay out of pocket, and his father refuses to help.

He came home on Monday of this week. On Tuesday, he played his sax for the first time in over a year. It was a beautiful sound to hear. On Wednesday, he started an online IOP that is held 3x week with the same rehab group, which his insurance company did approve, but I still don't know for how long. By Saturday, he started vaping marijuana again. Because of his diagnosis, he is now on 3 different medications for depression, anxiety, and bipolar 2 disorder. The side effects of combining any drug, including CBD oil, with his bipolar medication is horrific. I already had a glimpse of the side effect and how it affected him. I worry about him dying from an overdose. Please, please, pray for him to gain strength and get back on track to sobriety. I am lost. I don't know what else to do. I see him trying, but I also see him struggling. He has my support, and support of his sister, and friends and family. I feel like he needs a supportive village to gather around him to give him strength as well. Covid however, is making that difficult. I desperately ask for your prayers, for God to give him strength to get through this. I also ask for your forgiveness in posting this long, long, request. I guess I just needed to get this out, for you to hear this mother's cries, so you have a full understanding of the situation. Thank you so much for your prayers. God Bless.

Potential, if you have a support group that deals with addictions, please let me know. I feel that my son will do better surrounded by those that have been there and who overcame their addiction with God's help.

Please I ask everyone in this congregation to please join me in prayer for Alyiasia Theresa Pastora. She is one of my very best friend's cousin's son's girlfriend. She's a baby. Has not even yet begun living life. Please I know God is ALL POWERFUL and miracles happen every day. I cannot believe this is her calling.

Alyiasia Pastora turned 15 years old on October 24, 2020. Due to the worlds current state we had a small gathering and not the Normal quinceñera. Two days after reaching her 15th milestone she was involved in a horrific ATV accident that has changed so many people's lives. Alyiasia is currently on life support, after going through open brain surgery she is holding on to her life and we our trying to keep our hope alive. Her parents have been by her side everyday, and continue to ask everyone to help with prayers because we know God is the only one to grant miracles .

I'm requesting prayer for my Siberian Husky, Ares. He's 6 years old and he's a healthy dog. His health started to have a rapid decline on Tuesday. The vet recommended we go to a neurologist to ensure this isn't a neurological problem. They ruled out it was nothing neurological. They took blood and noticed his albumin was low, therefore she wanted to take a urine sample. To take urine from his bladder, she did an ultrasound and found a mass in his liver. I know that this is a demon attaching itself to his body in the form of a mass attempting to invade and oppress his body and attempting to rob us of our peace. Just like in the scriptures, my dog is my cattle. I am a strong woman of prayer, and I know that the power of prayer is real.

Please pray for my sister who is battling depression/anxiety...she's been going through this for a long time, but things took a turn for the worst in 2018 where she quit her job, and lost her apartment due to her depression.

She is not herself to this day and we are just praying the lord heals...

I am praying for a financial breakthrough!!!!

Give To The Vision

Give to the vision of Potential church so that we can partner with people to reach their God Potential.

Leave us a note or
drop by our campus
and say hi!